Kuwait Petroleum Corp. lowered its January official selling prices for crude bound for the United States and Europe, while it raised prices of barrels headed Asia, according to a notice seen by S&P Global Platts Dec. 10.

KPC decreased its Kuwait Export Crude delivered to USGC by 30 cents/b to a $1.40/b premium to the Argus Sour Crude Index, or ASCI.

The FOB KEC to the US also was lowered by 30 cents/b to ASCI plus 10 cents/b.

For Asia-bound barrels of KEC, KPC increased values by 65 cent/b to plus 25 cents/b against the average of Oman and Dubai crude assessments for December.

The differential for its Kuwait Super Light crude to Asia also increased, from minus 70 cents/b in December, to plus 10 cents/b in January.

KPC also increased its OSP differential for its Khafji crude by 40 cents/b to a 10 cents/b premium to Oman/Dubai.

KPC also increased its OSP differential for its Khafji crude by 40 cents/b to a 10 cents/b premium to Oman/Dubai. 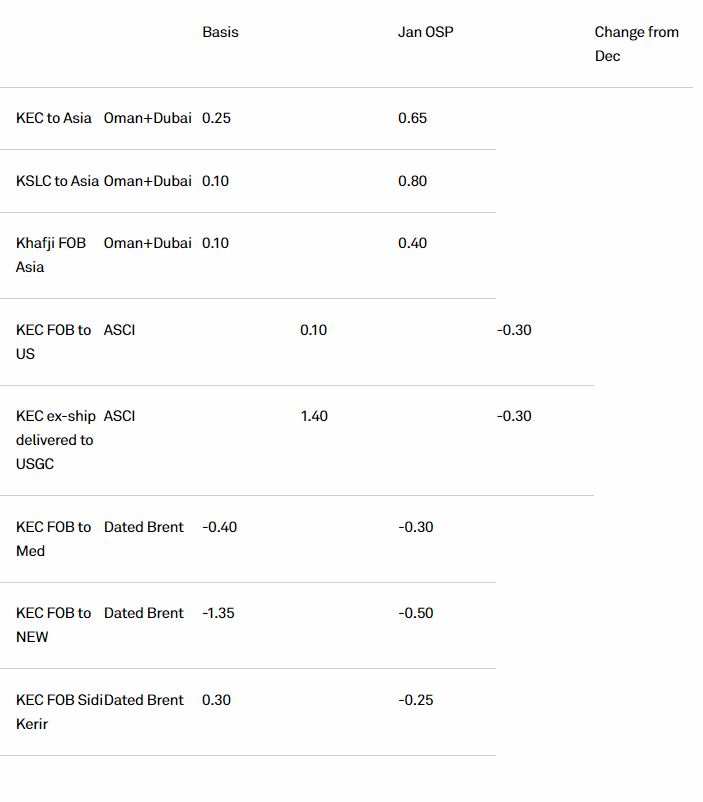 4 | the publication reaches you by | Kuwait Online

Kuwait to ramp up oil output to...

Plant named after hero of ‘The Martian’

Policeman run over in Kuwait was Saudi national

Ambulances arrive at the site of a rare suicide attack that hit a commercial street in central Baghdad.…

Stocks edged higher on Tuesday, rebounding from a rough week, as investors digested results from the new earnings…